Our strongest evidence for the occupation of the area by Iron Age people is the existence of Caesar's Camp. This is a large Hill Fort created on a spur of land jutting out from the plateau on its northern side. The camp is unusual in that it has the shape of an oak leaf. This may be just because it follows the contour. However we do know that the oak was a sacred tree to iron age peoples so it is likely that having found the site its shape was enhanced and takes on a great significance. Caesar's Camp is a Scheduled Ancient Monument and is a protected wild life area as a nesting site for 3 species of ground nesting birds: Dartford Warbler, Nightjar and Woodlark. Visitors are requested to keep to the paths and keep dogs on leads especially during the nested season. It is also forbidden to ride bicycles and to use metal detection equipment within the area of the Camp. 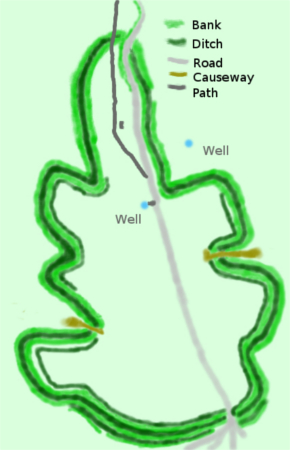 The plan shows the layout when the site was visited by members of the local Antiquarian society accompanied by a Mr Goodchild of Wellington College in 1880. In total the camp occupies some 17.5 acres and its ramparts are nearly a mile around. At that time there were 5 entrances to the Camp. Working from the top and going clockwise, there was:

The ramparts for most part consist of an outer bank, a ditch, and inner bank and in some places an inner ditch. At the southern end there is a second ditch and a  third outer bank, likely to be because the ground to the south does not fall away as it does elsewhere. The inner banks would have been some 6 to 10 feet higher than the enclosed area as can be seen at the southern end and the ditches would have been deeper with steeper sides. However erosion over the last 2,000 years has led to the banks partly collapsing into the ditches. Evidence from other Iron Age forts suggest that there would have been a wooden palisade along the top of the inner bank. It would have been about 10 to 12 feet high with an inner walkway. There would have been substantial gates at the East and West entrances. Where it exists, the inner ditch was probably for drainage and or waste water. It may have circumvented the whole camp but no evidence exists either way. There are several theories about the construction. One suggests that originally there was a single bank and the outer bank was formed when the ditch was deepened; there being no way the spoil could have been added to the inner bank because of the palisade on top. I am inclined to believe that a low inner bank was constructed when the Bronze age people adopted the site; this bank was enlarged by the Iron age people around 800BC then the ditch and outer banks were added when the Atrebates arrived and drove out the original settlers between 100BC and 60BC. There has never been a serious attempt to determine the exact build chronology and structure of the banks through an archaeological dig.

It seems that when the Camp was constructed it had just two or maybe three entrances, the East gate being the primary, and possible ceremonial entrance - it is awe inspiring to stand at the foot of the causeway and to look up towards where the gate would have stood; the builders just had to be all powerful to be able to construct such a camp. Both East and West gates are well protected by folds in the ramparts. It seems that the path running in from the north was widened to a track during the early 1900s at the time when the forest was turned over to commercial timber production. A modern and partly concrete surfaced entrance has been constructed (sometime between 1961 and 1973) entering the camp up through and along the line of the ditch on the north eastern side just adjacent to the location of the well.

This leaves the question of what is now called Queen Anne's Gulley. One theory is that it was constructed in 1708. Queen Anne (1665 - 1714), who was a keen hunter in the forest,  became too infirm by the time she was 43 years old to ride to hunt but was determined to follow the hunt in her carriage. She had many paths and roads cut into the forest to allow her passage. We know these roads and paths as Rides and the gulley would have been cut to provide access to Caesar's Camp. This does defy logic. One could not have found a much bigger engineering challenge than this route. It would require shifting vast amounts of soil to cut the gulley and construct the banks on both side. There would have been a far simpler route travelling a few hundred yards up a fairly gentle slope then in through the East Gate which already had a gently inclined causeway. I believe that the gulley already existed and was part of the original encampment. It would have been a narrow path, twisting down between the easily defended banks on each side and could have been used to drive livestock up and down from the camp to graze outside and water at the Well on the eastern side. This view is, at least partly, supported by an account of a visit in 1753 describes the path as "a narrow twisting track between high banks and clearly not recent". It is quite possible then for the builders of the Rides to widen it to take a carriage with much less effort than that required to cut it from scratch. But I suspect that the widening is much more recent and had little or nothing to do with Queen Anne! If there was need for an easy carriage entrance it would have been far simpler to take a track up a shallow incline and then in through the East Gate causeway.

There are two wells marked on the plan, one outside the ramparts on the east and one inside. The outside well is now capped off but the basin in which the well shaft was located can still be found as a roughly circular bowel in the ground. The site marked as a well inside the camp is actually more likely to have been a cistern than a well. As a well it would have had to be very deep to get down to the water table - remember that the soil here is predominately sand which does not hold water very well and there is much lower land just outside the ramparts. There was also evidence, back in 1880, for it to have been lined with clay and a primitive form of cement which suggest that it was intended to hold water that had been collect in other ways. Wells tend not to be lined with impermeable material - one wants water to accumulate in them, but cisterns are lined to prevent the water running out. The suggestion is that there would have been hollowed out wooden pipes or gulleys to carry rain water from the roofs of huts to the cistern. As with most of the Camp it has not been properly excavated so until that happens, I believe the cistern theory to be more likely. As with the well outside the ramparts the only visible remains of the cistern is a hollow in the ground.

The purpose of the Camp.

Most iron Age Hill Forts were built, not as a military establishment, but as a fortified habitation and it is most likely that several hundred families lived inside its walls. By today's standards 40 dwellings to an acre is quite common. Today we do build up as well as along but the site would surely accommodate 15 to 20 huts, together with animal enclosures, per acre giving a potential for 200 to 300 huts and maybe 1,000 inhabitants. Except at times of strife the livestock would be grazed outside the Camp. It is also possible that the Camp was a centre for trade, lying as it does on a line between other hill forts such as those in the London area and Silchester and perhaps religious ceremonies. It's oak-leaf shape certainly gives it a distinct connection to the ancient religions.

Sometime between 1881 and 1901 a cottage was built adjacent to the path in the north. It has now been demolished and very little trace remains but a few fruit bushes can be found in what would appear to have been it's garden. It has been suggested that this was a forester's cottage.

Although the whole camp was covered by trees from some time before 1800, it was stripped and replanted in the early 1900's as a pine plantation. The timber was intended for pit-props and telegraph poles.

In 1995 there was a Geophysical survey (full details here) of a section of the camp, covering about 5 of the 17.5 acres. This did show some activity below the surface, namely evidence of randomly distributed pits and a couple of ditches. However it was noted that significant forestry activity could have destroyed much of any archaeological evidence and the particularly acid nature of the soil (due to forestation) would have corroded any ferrous material so making it undetectable. It is possible that other, as yet, un-surveyed areas might produce different results but there is little hope that anything significant remains.

Today the camp has been largely cleared of trees and given over to heather in an attempt to create a good habitat for ground nesting birds and to keep the bracken away from taking over. In the summer of 2103 a fire in the camp burned out about one third of the heather but it is hoped that it will recover over the succeeding year or so.

If you find this site interesting...

...please make a donation to help support its development and hosting.