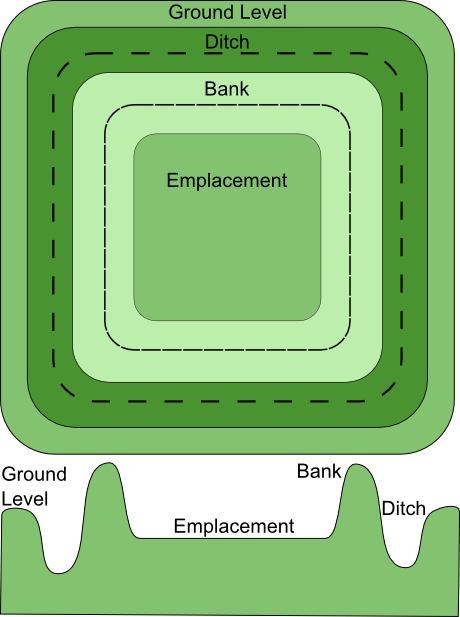 In 1792 the British Army built seven redoubts in an arc on the South West edge of the Bagshot Plain and an eighth on the nearby Butter Hill just to the south. Until 2014 there were believed to only be 7 redoubts but an eighth to the east of the others was discovered and confirmed in the spring of 2014.

Each redoubt is roughly square with widths ranging from about 150 feet to 175 feet. They consisted of an outer ditch between 6 and 10 feet wide and about 3 feet deep, a bank rising about 3 to 4 feet above ground level and a hollow in the centre running at about the external ground level. Construction was by simply digging the ditch and piling up the spoil to form the bank. The banks may have been given additional height by positioning sandbags or soil filled barrels on the top.

The most westerly Redoubt, which is on Wagbullock Hill had some additional banks and ditches arranged on the edge of the hill probably at the time of the Boer War.

In 1792 the Army had recently completed its guide to battlefield tactics - The Handbook of Military Manoeuvres - and wished to test it out in near to real conditions. The Army had foreseen the Napoleonic wars of 1793-1815 and wanted to be ready. In addition it had three other reasons:

The Redoubts were used both for training troops and for a public display of military strength by a series of manoeuvres between 23 July to 8 August 1792. It is said that on the last day King George III with his wife, Queen Charlotte and his fifteen children, was present to watch the final part of the exercise which included spectacularly blowing up the Redoubt on Butter Hill.

The basic exercise was to position ranks of infantry and cavalry from one regiment behind a line of redoubts occupied by infantry or guns and for another regiment to attack the line across the heath. The commanders of the attackers could sit in the Butter Hill Redoubt and control the attack on the other seven.

These eight Redoubts are the only surviving example of a full battlefield disposition from the period and thus contribute to the unique nature of the history of Swinley Forest.

Unfortunately two of the seven redoubts have been seriously damaged in recent years. The one situated on Wagbullock Hill is now almost completely obliterated, probably by forestry work since World War I although the Schedule Listing describes some parts of both the Redoubt and the later ditches as being still visible. Further damage was caused during fire-fighting of the Great Forest Fire in May 2010. There is now no sign of the Redoubt. The banking on the North and Western side of the hill is very recent, mainly 2010. The second most easterly of the other six in the Forest has been seriously damaged in the last couple of years by unofficial digging by cyclists to create a BMX type track and obstacles.

The remaining 5 are still in good condition although 2 are heavily overgrown with young trees.

The Crown Estate is now planning some restoration and preservation of the damaged redoubt and to clear the overgrowth from the 4 redoubts in their area of the Forest and provide easy access to them as part of a History/Heritage walking trail. It is to be hoped that The Forestry Commission can be persuaded to include their 3 redoubts in this plan.